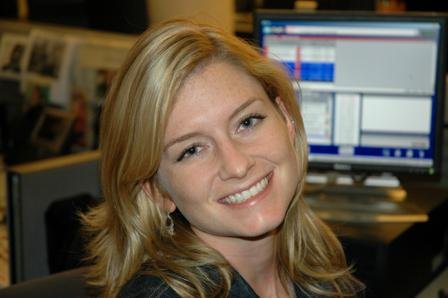 The Mary Reynolds Babcock Foundation’s new Communications Officer has worked in television newsrooms across North Carolina, in New York City and at CNN in Atlanta. Now, Susanna Hegner is excited to tell the powerful stories of the Foundation’s partners and the communities they serve.

“I realized I wanted to stop reporting on the issues plaguing our neighborhoods and start supporting the work of organizations that are addressing them,” Susanna says. “I am thrilled to join an organization whose values align so seamlessly with my own, and I’m excited to get to know the Foundation’s grantee partners.”

In her new role, Susanna will craft and implement the Foundation’s communications strategy, manage the website and social media campaigns and showcase the ways grantee partners are helping their communities achieve social and economic justice. As part of the Program Team, Susanna will help grantees build their capacity for strategic messaging and travel with Network Officers to capture impactful stories from the ground.

A native of Greensboro, North Carolina, Susanna double majored in Journalism and French at the University of North Carolina at Chapel Hill. Her passion for volunteering has taken her to Cuba and to Haiti, where she spent a portion of her summer vacations as a teenager. In January 2010, she returned to Port-au-Prince to cover earthquake rescue and recovery efforts.

Congratulations on your new

Congratulations on your new position Susanna. We look forward to working with you.