"As the South Grows" series highlights opportunity in the region

The National Committee for Responsive Philanthropy and Grantmakers for Southern Progress have teamed up on a series of reports highlighting some of the promising systematic change efforts at work across the South. MRBF supported the project and Program Director Lavastian Glenn served on the advisory committee.

As the South Grows highlights stories of potential, impact and capacity in the South. The project aims to “help funders better understand that potential and provide tools for advancing work that will lead to lasting, just change,” write GSP Project Director LaTosha Brown and NCRP President and CEO Aaron Dorfman.

The first installment, “On Fertile Soil,” explores opportunities for philanthropic investment, through the stories of leaders building power in Alabama and Mississippi despite “well-resourced opposition to self-determination for communities of color, poor communities, immigrant communities, women and others.”
(Released April 4, 2017)

Part two, “Strong Roots,” looks at the similarities of the South Carolina Lowcountry and Kentucky Coal Country. Social change organizations in both regions are focused on building wealth in marginalized communities through community economic development, an often overlooked but critical vehicle for advancing equity and justice. As authors Ryan Schlegel and Stephanie Peng point out, “When community asset building directly addresses the South’s history of extraction, exploitation and systematic exclusion from economic opportunity, it is indeed a long-term systems change strategy.”
(Released June 27, 2017)

Part three, "Weathering the Storm," points to the lack of funding for urgent efforts to support struggling communities as they grapple with ever-worsening storms, flooding, droughts and fire. Citing specific examples in Southern Louisiana and Eastern North Carolina, the authors argue, "Funders concerned about threats from our changing climate are missing a crucial opportunity to invest in solutions of national and global relevance if they are not investing in Southern organizations and networks."
(Released November 29, 2017) 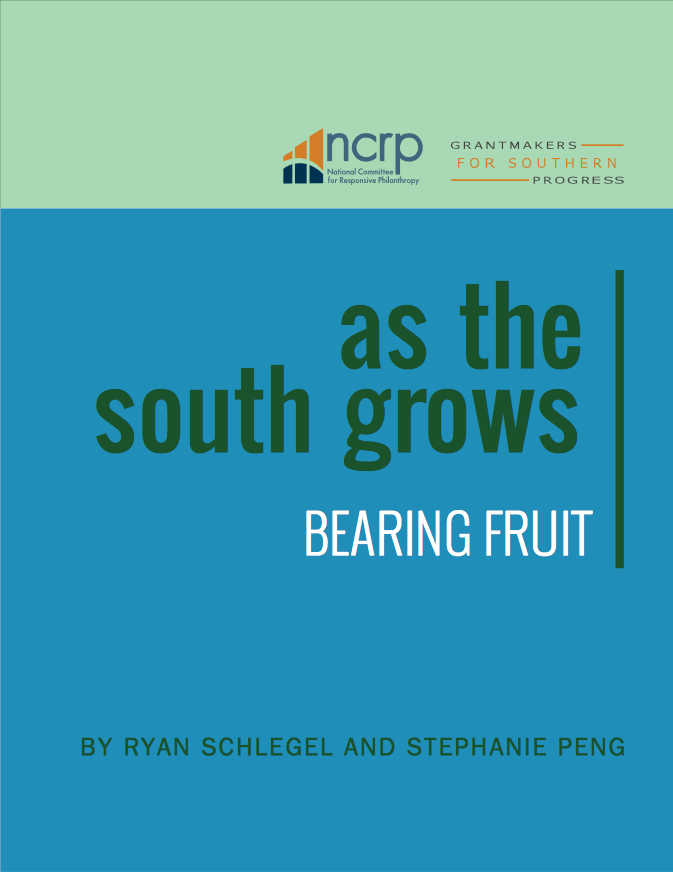 Part four, "Bearing Fruit," explores how Southern cities present opportunities to break down structural barriers that will have reverberating effects on the rest of the country. This study focuses on the grassroots coalitions working to make Metro Atlanta "be what it says it is," as Partnership for Southern Equity Chief Equity Officer Nathaniel Smith puts it. "There are several organizations doing really good work, and if they were able to be brought to scale it could have some major impact,” explains Southerners on New Ground Executive Director Mary Hooks.
(Released March 1, 2018)

Part five, "So Grows the Nation," offers eight actions funders can take to jump-start their work in the South. The final installment in the series highlights why it's important for funders to begin or increase giving in the region and how they can do so in ways that produce lasting, positive impact. "A large part of our work is around bridging divides and building the beloved community," says Ainka Jackson, Executive Director of the Selma Center for Nonviolence, Truth and Reconciliation. "I really feel that until we work on changing hearts and minds, and not just changing policies, we will continue to have policies formed not in best interest of our community."
(Released June 12, 2018)