Selma: A Shining Moment in the Conscience of Man

This week, the nation’s attention will turn to the South as 100,000 people alight on Selma, Alabama. The crowds commemorating the 50th anniversary of Bloody Sunday will include U.S. presidents, members of Congress, civil rights heroes, grassroots organizers, celebrities, blacks and whites, Democrats and Republicans, rich and poor.

The pilgrims will pause to remember the day law enforcement officers used batons, tear gas and stampeding horses to beat back peaceful marchers seeking to register to vote. They will recreate the crossing of the Edmund Pettus Bridge – a structure that, despite its hallowed place in American history, still bears the name of a Ku Klux Klan leader.

Two weeks after the clash in Selma, Martin Luther King, Jr., set off with 3,000 demonstrators on a 50-mile march to Montgomery to demand legal protection for voting rights. This time, Army, FBI and National Guard troops escorted the marchers as they walked 12 miles a day and slept in fields at night.

When the marchers arrived at the State Capitol, Dr. King addressed a crowd of 25,000. In his soaring remarks, he noted a small Southern town’s outsize contribution to the civil rights movement: 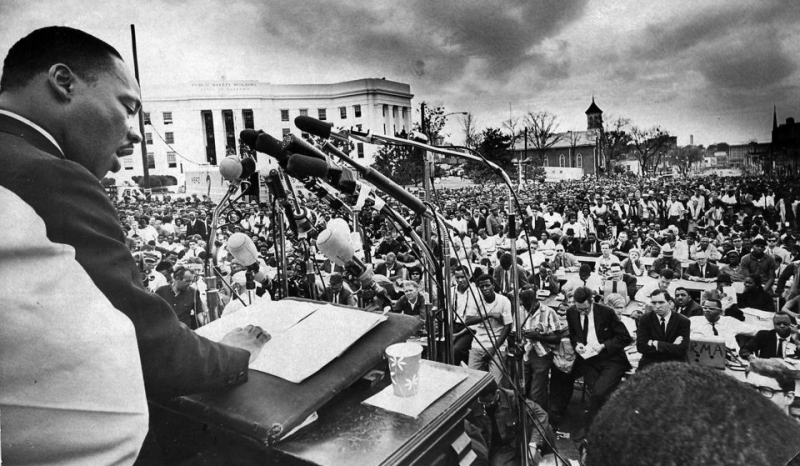 “Selma, Alabama, became a shining moment in the conscience of man. If the worst in American life lurked in its dark streets, the best of American instincts arose passionately from across the nation to overcome it. There never was a moment in American history more honorable and more inspiring than the pilgrimage of clergymen and laymen of every race and faith pouring into Selma to face danger at the side of its embattled Negroes. The confrontation of good and evil compressed in the tiny community of Selma generated the massive power to turn the whole nation to a new course.”

That new course led to the Voting Rights Act of 1965, a landmark law considered the most effective piece of civil rights legislation ever enacted.

Dr. King and his fellow freedom fighters were keenly aware of the significance of the South in the trajectory of the country. We hope to rekindle that awareness 50 years later.

The Mary Reynolds Babcock Foundation will be represented at commemorations in Selma and Montgomery. With our colleagues at Grantmakers for Southern Progress, we’ll host a “funder’s delegation,” where our Alabama grantee partners will describe their work to improve communities and outline the opportunities they see for progress. We plan to shine a positive spotlight on the South, point out the opportunities for investment here and celebrate the as-yet-incomplete work of those heroic marchers.

The 50th Anniversary was a

The 50th Anniversary was a very powerful event and still in Selma, we have a long way to go in the battle for peace, justice, and equality. Just read the March 6 or 7th article in the LA Times.