We are deeply saddened by the death of Rick Cohen, a journalist, critic and dogged advocate for rural America. Cohen wrote prolifically on a wide range of topics for Nonprofit Quarterly, never hesitating to pen often harsh -- but always fair and valuable -- assessments of philanthropy. He researched the grantmaking disparity between rural and urban areas and frequently challenged foundations to invest meaningfully in underserved communities. 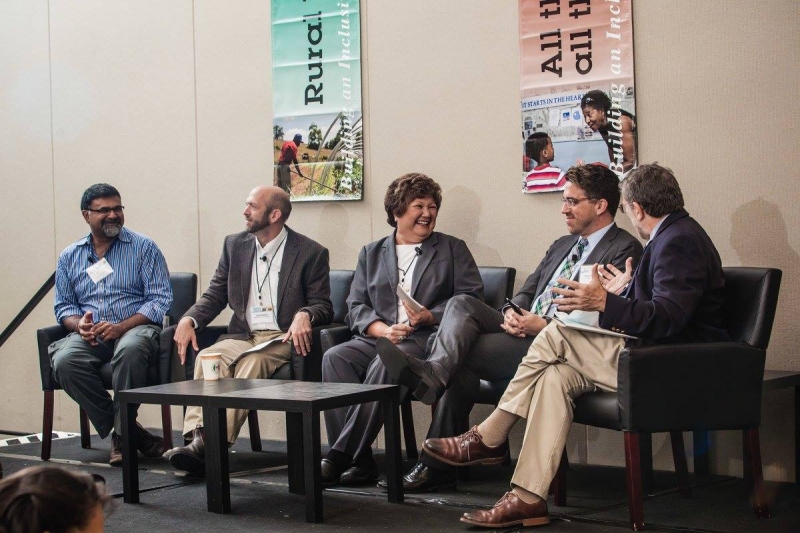 In September, Cohen moderated a panel on this very subject at the National Rural Assembly with our Executive Director Justin Maxson.

"My great uncle would have called him a mensch—a person of deep moral character with an overriding commitment to justice. He was a champion of things that mattered and a friend," said Maxson.

Below is an article by the Daily Yonder about Cohen's life and impact.

Rick Cohen’s groundbreaking research on private philanthropy found that major foundations gave up to 99% of their grant dollars to projects in metropolitan areas, leaving rural groups struggling to serve community needs. Colleagues say Cohen was a fierce but fair reporter with a strong commitment to equality and social justice.

Rick Cohen, who passionately and honestly critiqued the nonprofit and philanthropic sectors with pointed journalism and research, has died.

The announcement came midday on Tuesday from Nonprofit Quarterly, the publication for which Cohen wrote for the past nine years. The announcement did not include a cause of death.

Cohen called out the nation’s largest foundations for what he said was their failure to invest equitably in rural community development. Simultaneously, he challenged the nation’s nonprofits – both rural and urban – to do better in their efforts to serve marginalized and underrepresented populations.

“I know that if he saw me fall short, he would write about it,” said Dee Davis, president of the Center for Rural Strategies and publisher of the Daily Yonder. “He never took a cheap shot. But he asked hard questions and could penetrate glossy answers.”

Cohen’s colleagues expressed respect for the journalist’s work, admiration for his principles, and shock at news of his death.

“Rick Cohen could make me squirm with the best of them,” said Justin Maxson, executive director of the Mary Reynolds Babcock Foundation, based in Winston-Salem, North Carolina. “He could be pretty tough when he felt like you weren’t giving him enough of the story but always with respect and a recognition that things are rarely simple.”

Maxson said Cohen had deep moral character and unflinching commitment to documenting efforts to achieve economic and social justice. “Without Rick around, the whole story just got harder to find,” he said. “He will be missed.”

“Rick Cohen was a friend to all rural residents whether they knew him or not,” he said. “It’s hard sometimes to know if we’re making a difference as we struggle to increase resources for our rural communities. But [Cohen] made a huge difference and gave us all the data-based analysis we needed to help make the case for rural.”

Cohen’s projects for the Daily Yonder included reports on the giving patterns of the nation’s foundations. He conducted his first study of rural philanthropy more than a decade ago and found that national foundations gave a lot less to rural community development than they did to urban community development on a per capita basis. His research showed that only about $1 to $1.50 of every $100 foundations give away finds its way to rural communities. He repeated the study over the years and made presentations on it to the National Rural Assembly and the annual Rural LISC Seminar, a national gathering of rural development organizations.

Years after his latest rural philanthropy study, a formal academic study by the Economic Research Service of the U.S. Department of Agriculture confirmed Cohen’s findings. In contrast to institutional researchers, Cohen said, he had only a few months to complete his project and had no clerical or research assistance or other institutional support. “I want you to put thatin the Daily Yonder,” Cohen said at the time.

Cohen was a prolific writer. The last five days of stories in Nonprofit Quarterly include 10 that Cohen wrote. “He was one of the fastest writers I ever came across,” said one comment on Cohen’s death announcement at Nonprofit Quarterly.

Cohen’s specialty was private philanthropy. Before joining Nonprofit Quarterly he was director of the National Committee for Responsive Philanthropy, a watchdog organization that monitors and analyzes philanthropic giving.

He was a harsh critic of things he considered fads, such as grant “competitions,” wherein foundations conduct grantmaking as contests that he thought substituted glitz and publicity seeking for thoughtful and careful work based on proven concepts. He also disliked what he thought were attempts by philanthropies to directly control grantee work. Instead, he argued, philanthropies should help establish effective nonprofit organizations and hold them accountable.

He expected foundations to serve the public good in return for their tax exempt status. His research was used as part of the so-called “Baucus Challenge,” in which Montana Senator Max Baucus asked foundations to double their grants to rural work. Though the challenge resulted in conferences and a report, Cohen said the response was inadequate and had not resulted in more equitable giving to rural projects. The Council on Foundations said the efforts had raised awareness of the need for rural philanthropy and created a blueprint for rural communities to create their own locally focused foundations.

Disclosure: The Center for Rural Strategies, which publishes the Daily Yonder, coordinates the National Rural Assembly.