This originally appeared as an op-ed in the Chronicle of Philanthropy on July 11, 2018.

A county in Mississippi with a 28 percent poverty rate is about to boast the state’s first and only year-round, fully accessible camp for disabled children and adults. A rural county in South Carolina will soon have a dedicated high school to prepare students for health careers. In South Dakota, dilapidated school buildings in a county that’s 43 percent Native American are to be transformed into state-of-the-art facilities.

These are among 100 projects that have gotten off the ground through creative efforts to aid persistently poor counties by unlocking as much as $423 million from government and private sources. Americans in high-poverty rural areas will benefit from community projects now in the pipeline, including health clinics, hospitals, assisted-living homes, schools, child-care centers, recreation and tourism hubs, and other facilities and programs.

But funding alone isn’t moving shovels in these small towns. Mission-driven organizations known as community-development financial institutions — or CDFIs — are behind the progress. They consist of local experts who know what their neighbors need and who have the relationships and knowledge to tailor solutions to specific challenges in their communities.

That’s why the Mary Reynolds Babcock Foundation, which I head, has been supporting an effort known as Uplift America, which seeks to make these organizations stronger so they can use their expertise and relationships for the greater good.

The partnership just published a progress report detailing the scope and geography of these local lenders and the much-needed projects they’re financing. It is worth reading for all grant makers concerned about advancing America’s too-often-neglected rural poor and middle-class residents.

A new United Nations report finds tax cuts for the ultrarich coupled with erosion of protections for low-wealth and middle-class families are exacerbating wealth inequality and extreme poverty in the United States. In this climate, it is vital we support the communities most likely to be harmed by these policies and find out what they need to stay on their feet. 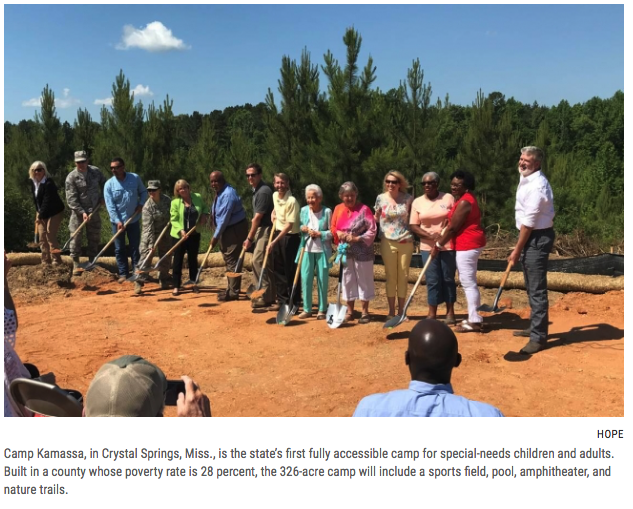 Places outside America’s cities have vast natural resources, agriculture, and manufacturing businesses, as well as millions of proud, passionate people with rich cultural traditions. Latinos, African-Americans, Asians, and Native Americans are well represented, and in many areas, expanding immigrant populations are helping to keep communities afloat.

These places are critical to the country’s overall economic health, but to adapt an old cliché, when America sneezes, rural regions catch a cold.

A new Save the Children report finds that while urban poverty remains too high, rural poverty is much more pervasive and persistent. Nearly a quarter of American children in rural areas grow up poor; the figure is one in three or higher across much of the South.

This isn’t a new phenomenon. Lack of opportunity, low educational attainment, limited access to health care, slower recovery from recessions, rising income inequality, and other factors have kept too much of rural America in poverty for generations. A paucity of investment and outright neglect have led to decaying infrastructure and inadequate public services, leaving many areas with open sewage, undrinkable water, and crumbling schools.

Philanthropy has not been stepping into the breach — at least not at the scale needed to tackle the challenges. U.S. Department of Agriculture economists analyzed grants from 1,400 of the largest foundations from 2005 to 2010; the analysts concluded that only 5.5 to 7.5 percent of those grants benefited rural counties, even though 19 percent of Americans were living in such places.

Researchers also found that the greatest benefits from grant making to rural areas go to counties that already have well-funded nonprofits with the resources to court support from foundations.

It’s clear we need to make a shift in how we work.

One way to make a huge difference is for grant makers and the government to better tap the role of community-development financial institutions as key players in deploying more assets to rural America. These organizations excel in fighting rural poverty and in working on ways to shape policy, develop leaders, and expand civic engagement.

Efforts by these institutions have prevented some communities from becoming banking deserts, where people are likely to resort to high-cost predatory lending. These institutions provide services such as small-business loans, mortgages, financial education, debt consolidation, and financing for projects including affordable housing, schools, and grocery stores. They help individuals, families, entrepreneurs, developers, and municipalities improve their financial situation by providing not just capital but also hands-on assistance and training.

What’s more, these institutions often promote potential new growth areas for local economies like renewable energy or cultural tourism. Some educate the public and advocate for policies that offer ladders out of poverty so low-wealth people and small businesses can achieve their financial goals, thereby contributing to the improvement of local economies in general.

Increasingly, efforts such as these are being done collaboratively with other nonprofits, all with the aim of making development efforts across the country more democratic.

The Bill & Melinda Gates Foundation recently gathered academic, nonprofit, religious, philanthropic, and business leaders to examine the underlying factors of chronic poverty, including social, political, and economic forces. Among the recommendations issued by this collective effort, the U.S. Partnership on Mobility From Poverty, is to give residents of poor rural areas better access to affordable, responsible financial tools.

Specifically, the partnership recommends strengthening and expanding the constellation of 1,100 financial institutions serving people and places neglected by big banks. The group cited Uplift as an example of "the potential for collaboration among financial institutions, government, foundations, and CDFIs in expanding access to financial services in economically distressed areas."

In today’s turbulent political and economic environment, efforts like Uplift America face new obstacles. Since the effort began, the leadership at many federal agencies has changed greatly. There is also a lot of uncertainty about policies and regulations in the financial world. While we hope to develop more collaborative efforts like that one, they may look a little different — and maybe that’s a good thing.

What is clear is that the demand and the need remain high. We hope to attract new sources of flexible capital that can deliver benefits to rural areas, involve smaller lenders, and seed a wider range of projects both large and small.

One ingredient in future partnerships will remain constant: trusted local lenders that are mission-bound to improve their communities and, with the right kinds of investment, can actually get it done.

In the meantime, the Babcock Foundation will continue to provide grants and program-related investments to community-development financial institutions in rural areas that have contributed so much to America but never gotten fair recompense.

Regardless of the shifting political winds, we hope more foundations will recognize that supporting these trusted institutions is a straightforward way to increase economic opportunity, improve the quality of life, and help realize the immeasurable potential of rural America.