Out of the Ashes of the Coal Economy, a Bright Future?

The last couple of years have brought substantial new economic challenges to Appalachian Kentucky. Already saddled with being one of the poorest regions in the country, mountain communities 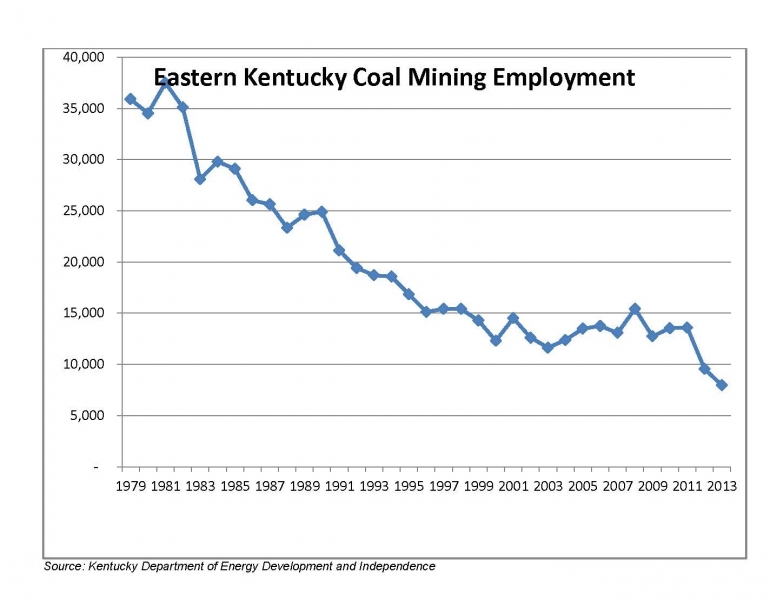 are being hit hard by steep layoffs in the coal industry. Since 2011, eastern Kentucky has lost more than 5,700 good-paying coal mining jobs. That’s a loss of 42% of the area’s coal workforce.

This drastic industry decline is being driven primarily by the region’s diminishing coal resources. After more than a century of mining, eastern Kentucky coal production peaked in the 1990s and has been steadily decreasing since. Coal from the remaining deposits is more expensive to mine, making it less competitive in the energy marketplace. New developments in alternative energy sources over the last several years—particularly natural gas made more abundant and cheaper by fracking technologies—have accelerated the nation’s move away from Appalachian coal.

The dramatic loss of coal jobs has added urgency to the long-standing need for diversity in the region's economy. But to achieve greater diversification, Appalachian Kentucky needs three critical things:

1) Strong and deep civic engagement in an effort and process to envision and create a better future.

2) Concrete strategies and ideas that could create jobs and economic activity while improving the region’s quality of life.

3) Financial resources to implement those strategies and ideas.

One way the Mountain Association for Community Economic Development (MACED) is trying to address these needs through policy work on Kentucky’s coal severance tax. Totaling over $100 million a year in eastern Kentucky, the coal severance tax is the region’s largest single pool of public resources dedicated, at least in part, to economic development. In 1992, the state passed legislation devoting about half of the monies from the severance tax to redevelopment in the coalfields.

However, most of those monies were restricted exclusively to the building of industrial parks, many of which have sat empty, or to help shore up local government budgets. After it became clear the region had too many industrial parks, the legislature unfortunately didn’t embrace new strategies. Instead, they began to use the monies for a wide variety of legislator-identified local earmarks. No underlying development strategy guided the spending of money on these projects and no process was in place to gather community input and feedback.

As the coal industry declines and severance tax resources dwindle, it becomes ever more important that the money be spent wisely. For the last couple of years, we have been promoting a new conversation about these dollars as seed money for a just economic transition.

As a follow-up to a brief MACED issued last year, we’ve just released a new report calling for the creation of an Appalachian Planning and Development Fund. This report outlines a proposal for a regional planning body that would facilitate a democratic public process to create an economic transition plan. The state would dedicate 25% of eastern Kentucky coal severance tax dollars to a fund. A portion of those monies would be spent annually to begin implementing the plan. The rest would go into a permanent endowment to be available for development strategies indefinitely—and well after the coal resource no longer generates adequate annual revenues.

Many states, particularly those in the Western United States, have created permanent endowments for their severance dollars, and West Virginia is currently considering this idea using natural gas severance tax revenues from its fracking boom.

We don’t know how long coal will last in our region, and its decline could become even more precipitous than it has been recently. But the next 10 years are an opportunity. Will we start the process of planning and investing in the region’s economic future? Or will our communities follow the industry down the hole that’s been dug over the last century?

The answer to these questions depends on whether the dialogue in the region can shift from frustration directed at President Obama and the EPA about an alleged “War on Coal,” and toward how people in the region can work together to create a successful economic transition. That’s less about economic development strategies and resources, and more about coalfield citizens’ interpretation of what’s happening around them and belief about what’s possible.

We think that dialogue is really important, so we’re also engaged in a communications effort we call Appalachian Transition. Its purpose is to lift up a hopeful vision for Appalachian Kentucky, tell the facts about what’s happening with the region’s economy, share good ideas and demonstrate how many wonderful assets we have to build on.

There is a real path forward in the mountains. But the work must start now, it must be resourced and it must bring everyone to the table.

Jason Bailey is Director of the Kentucky Center for Economic Policy and serves as Research and Policy Director of the Mountain Association for Community Economic      Development. Since 1998 he has worked as a researcher and advocate addressing economic issues in the Commonwealth. Jason’s service includes the National Advisory Board of the Rural Policy Research Institute, the Kentucky Tax Reform Commission and the Kentucky Commission on Small Business Advocacy.