K10: How Women Are Rebuilding the Gulf Coast

Ten years ago, Hurricane Katrina spawned the need for new construction and a skilled workforce all over the Gulf Coast. It also exacerbated already dire economic situations for low-income women in Mississippi. The Moore Community House, which serves low-income women and children in east Biloxi, found a way to address both of those needs when it launched its Women in Construction (WinC) program in 2008.

Since then, the initiative has grown significantly to include training and certification in general construction, shipbuilding, welding, green jobs, disaster relief and other trade skills. More than 260 women have graduated so far, and through partnerships with companies across the Gulf Coast, 70 percent of them have gained employment or continued their educations in construction-related fields.

The need for such programs is great. According to U.S. Census data, about a quarter of Mississippi’s women and more than a third of its children live in poverty. The $7.25 minimum wage keeps a family of two living below the federal poverty line, but a WinC graduate who lands a welding job in a shipyard, for example, typically earns $18.80 an hour plus benefits.

The perks of Women in Construction, however, go beyond a living wage. WinC recruits participants from MCH’s Early Head Start program, public housing programs, welfare offices, domestic violence shelters and employment offices. The program then offers stipends for transportation and child care, and links students with WinC alumnae, legal services and resiliency resources. In her guest blog post about the program, MCH Executive Director Carol Burnett wrote, “WinC provides women with the economic independence and personal strength to break away from abusive relationships and build new and independent lives for themselves and their children.” 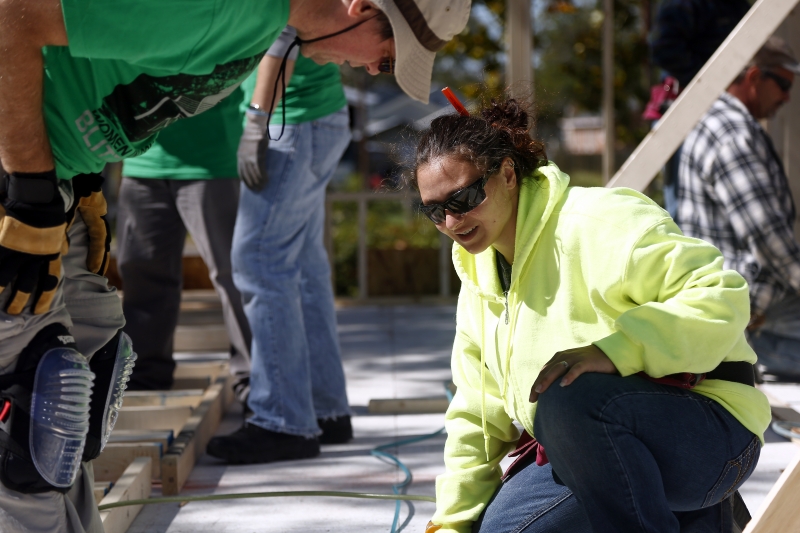 The program also dispels gender bias in fields traditionally dominated by men. “This is not charity. We build ships for the United States Navy to a very, very high standard,” said Mark Scott, Manager of Workforce Education for Ingalls Shipbuilding. “The reason that we hire the women from Women in Construction is because they help us build ships safely, under budget and on time.”

WinC Program Director Julie Kuklinski says after the homebuilding project featured in this video, participants built a new and improved training center that won an award from the American Institute of Architects. “This project speaks volumes to the women in the community, that there are opportunities in our neighborhood, and women are worth the investment,” Kuklinski said.

WinC is now a member of several state and national initiatives to connect women with high-skill, high-wage employment in male-dominated industries and put families on the path to economic security. “With each graduating class, WinC is feminizing the face of construction on the Mississippi Gulf Coast one well-trained woman at a time,” said Kulkinski.