Getting to Collective Impact

Earlier this year the Foundation Review published an article featuring a case study of collective impact from MRBF's work with the Central Appalachian Network (CAN). Below is an excerpt with links to the full article.

Getting to Collective Impact: How Funders Can Contribute Over the Life Course of the Work
Author: Douglas Easterling, Ph.D., Wake Forest School of Medicine 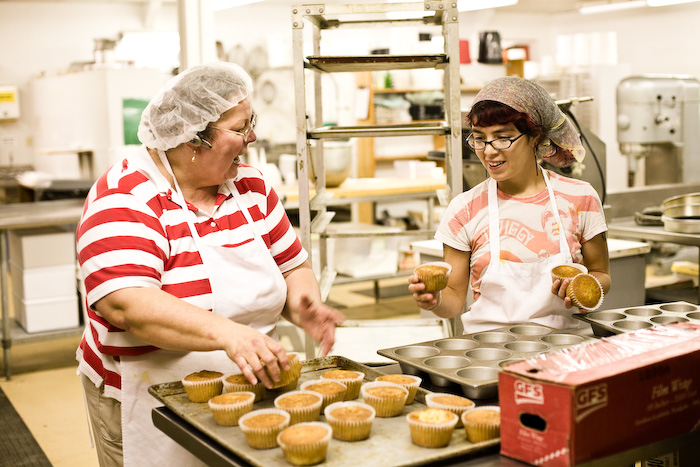 Entrepreneurs at work in the ACEnet Food Incubator. ACEnet is a member organization of CAN.

As foundations mature and gain experience, they often come to realize that their core activity –making grants to nonprofit organizations – only rarely leads to the “real change” that the board and staff had in mind. Thus it is not at all surprising that many foundations have become intrigued with the concept of “collective impact” that John Kania and Mark Kramer introduced in 2011.

Collective impact begins with the premise that “large-scale social change comes from better cross-sector coordination rather than from the isolated intervention of individual organizations” (Kania & Kramer, 2011, p. 38). The model identifies five specific conditions that allow collaborating actors to achieve large-scale impact: a common agenda, mutually reinforcing activities, continuous communication, a shared approach to measuring progress, and a “backbone support” organization that coordinates the work. The first three of these elements are included in nearly all models of collaborative problem-solving, dating back to the early 1990s (e.g., Mattessich & Monsey, 1992; Butterfoss, Goodman, & Wandersman, 1993; Lasker, 1997; Lasker & Weiss, 2003). Collective impact advances these earlier models by paying explicit attention to shared measurement and a backbone organization.

One of the most important unresolved questions for collective-impact initiatives (and for collaborative problem-solving more generally) is, “How can foundations be most constructive in supporting collaborative work that leads to collective action and generates large-scale impact?” The most common approach is for funders to convene the collaborative group, either directly or by encouraging a local actor to play the convening role. In a typical initiative, the funder or its agent calls together nonprofit and government agencies under the banner of a lofty goal, and then offers the prospect of grant dollars to motivate the group to develop a bold new solution to a big entrenched problem (Annie E. Casey Foundation, 1995; Hallfors, Cho, Livert, & Kadushin, 2002; Gallagher & Drisko, 2003; Trent & Chavis, 2009; Meehan, Hebbeler, Cherner, & Peterson, 2009; Kubisch, Auspos, Brown, & Dewar, 2010).

At least in theory, there are sound reasons for foundations to play a lead role in organizing comprehensive community initiatives and collective impact efforts. Collaborative problem-solving is a time-consuming, often frustrating process with an uncertain payoff. Kania and Kramer (2011) point out that cross-sector collective action does not naturally arise without leadership by an actor who brings a larger frame of reference. In their view, foundations are uniquely positioned to play this sort of role because a foundation is typically familiar with, and has influence over, many of the organizations that are working on the target issue.

Kania, Kramer, and their colleagues at FSG have described a number of cases where funder-led coalitions have generated communitywide impacts, including the Strive Partnership in Cincinnati and the coalition to end homelessness in Calgary, Alberta, Canada (Kania & Kramer, 2011; Hanleybrown, Kania, & Kramer, 2012). Although funder-driven collaboration sometimes leads to breakthrough solutions, foundations have also pushed nonprofit organizations and other actors into artificial, awkward, and unsustainable efforts.

In a recent study of networks involved in rural economic development, Paul Castelloe, Thomas Watson, and Katy Allen (2011) found that one of the major obstacles to success was “funders trying to direct or run the network” (p. 68). One of the nonprofit leaders interviewed in the study lamented the many problems that arise when a funder brings organizations together with a preset agenda.

When they come in and force them and it’s not an organic situation, I don't think I’ve ever seen any that have been successful. … That just is so bogus to me. … They’ve got the housing people, the medical people. They’ve got everybody from every category and they just don’t know where to go. It takes them years to figure out what do they even want to talk about. And then when they start, they infringe on things that other people are trying to do. … If all of a sudden the pot dries up or really shrinks down, they aren’t there. They’re no longer talking to each other.

In their extensive review of community-change initiatives, Voices From the Field III, Anne Kubisch and her colleagues point to an inherent flaw in funder-driven collaborative initiatives: They “require new implementation processes and structures that can distort local energy, provoke resistance, and disrupt existing relationships among local players and programs” (Kubisch et al., 2011, p. 140).

In many if not most collaborative initiatives, the participating organizations spend the bulk of their time sorting out their interests and determining a common agenda, with little energy left to actually carry out meaningful collective action. The participants not only need to find common ground, but also must work together cooperatively on strategies that go beyond their own missions. Even if the larger group achieves its goals, the member organizations may find themselves in a weakened position because of the time and resources invested (White & Wehlage, 1995; Kreuter & Lezin, 1998; Hallfors et al., 2002; Kubisch et al., 2010). Some of these initiatives have left a wake of dashed hopes, strained relationships, weakened agencies, and even damaged communities (Brown & Fiester, 2007; Trent & Chavis, 2009; Kubisch et al., 2010).

Experiences such as these have prompted calls for more of a hands-off approach on the part of funders. For example, Kristi Kimball and Malka Kopell (2011) argue that, “Too often, funders insist on controlling the ways in which social problems are solved. … Letting go is what foundations must do to achieve higher impact” (p. 37).

While foundations can be legitimately criticized for being heavy-handed in convening collaborative bodies and setting their agenda, this does not imply that foundations should play a passive role when it comes to supporting collective impact. Foundations can make vital contributions to this work – in ways that go well beyond financial support. However, to be a constructive force, the funder needs to move beyond convening coalitions around a specific goal. The most effective and productive coalitions are those that emerge naturally when an existing network decides to move to the next stage of working together.

This article describes how a funder can be a constructive force in moving a group of organizations toward high-impact collective action. We begin with a developmental theory that specifies five distinct stages that organizations naturally pass through on their way to collective impact, beginning with the stage where those organizations are disconnected from one another. Funders can advance large-scale impact by assisting organizations in forming intrinsically valuable networks, by providing financial and other support to those networks, and, when appropriate, by offering resources and counsel that allow the organizations to recognize and act on their shared interests. At all stages in the life cycle of a network or coalition, foundation staff need to be willing and able to enter into productive, give-and-take relationships with the actors involved.

The theory and the role of the funder are illustrated through a case study of the Central Appalachian Network (CAN), which consists of six nonprofit organizations that promote sustainable economic development in various rural subregions of Appalachia. CAN is one of a handful of networks that have transitioned from informal networking to collective impact. A variety of regional and national foundations, including W.K. Kellogg, Claude Worthington Benedum, F.B. Heron, Mary Reynolds Babcock and Ford, as well as the Appalachian Regional Commission, have played a crucial role in supporting CAN over the course of its history.