Celebrating a Year of Successes

As we begin a new year, we’d like to toast all of our grantee partners across the South for a very successful 2016. Here are a few of the year’s achievements:

The Georgia Budget and Policy Institute led the successful opposition to a tax-cut plan that would have damaged the state budget and eroded funding for schools and other services. Late in the legislative session, lawmakers replaced the language in a non-controversial bill with a proposal to reduce the top rate of the state income tax. They also advanced a constitutional amendment to cap and reduce the state's personal income tax further, a move that would’ve restricted future lawmakers’ ability to respond to public needs. GBPI responded with research, analysis and strategic communications. GBPI made sure every member of the General Assembly received its analysis and fact sheet, briefed lawmakers in person and highlighted the proposals’ pitfalls to the media. GBPI collaborated with teachers and education advocates, a women's group, and experts who pointed to the threat to the state's AAA bond rating. The Center on Budget and Policy Priorities in Washington supported the campaign with added expertise, communications assistance and financial resources. Lawmakers ultimately decided not to pursue a vote they felt they could no longer win. 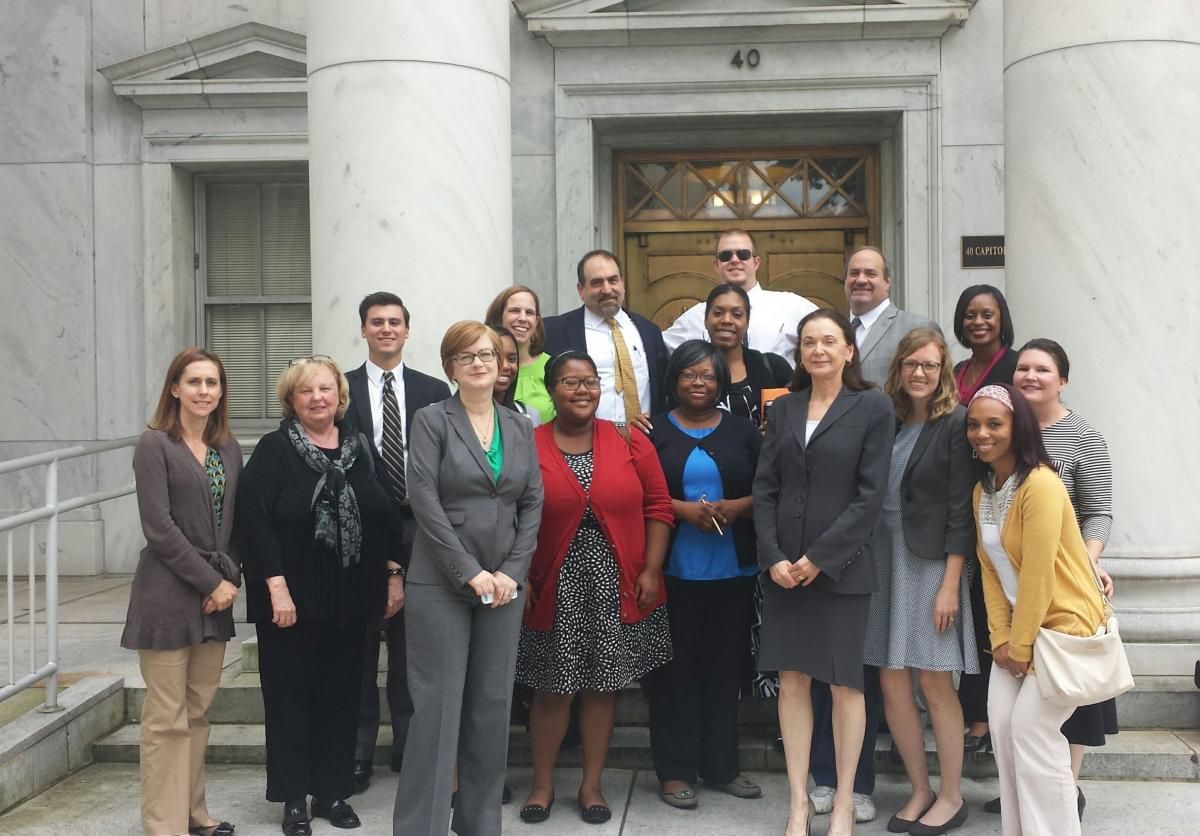 The Georgia Justice Project won a unanimous victory in the state Supreme Court that will have positive impacts on the lives of millions of Georgians. In 2013, GJP won a new law expanding expungement for non-convictions and certain misdemeanor convictions. When the Clayton County Solicitor General’s office wrongly denied an application for expungement, arguing the old law should apply to the case, volunteer attorneys helped GJP with the appeal. A coalition of national and state partners submitted a friend-of-the-court brief explaining the essential role expungement plays in helping individuals obtain employment and housing after an arrest. The Georgia Supreme Court sided with GJP. Not only did this ruling clear the client’s record; millions of Georgians now can access this legal relief. “Georgia Justice Project is committed to defending our clients' right to restrict eligible records so that people with a criminal record can move on with their lives and be productive citizens,” said GJP.

The Greater New Orleans Foundation helped people with previous convictions attain employment in the medical field by working with healthcare employers to change their hiring practices. Through its New Orleans Works initiative, the Foundation connected healthcare partners with Johns Hopkins University, which has changed its eligibility requirements regarding those who were previously incarcerated. As a result, Ochsner Health System decided to examine each applicant with a criminal history on a case-by-case basis. GNOF said, “This is a significant change because it means that the largest employer in our region is willing to look beyond criminal history and give our citizens the second chance they deserve.”

The Louisiana Budget Project won the extension of a federal waiver, guaranteeing food assistance for tens of thousands of citizens. When LBP learned about the impending expiration of the waiver, which allows able-bodied adults without dependents to access SNAP benefits beyond a three-month time limit, LBP put together a research brief explaining the importance of the waiver and presented it to the Department of Children and Family Services. Despite LBP’s efforts, the agency said it would not renew the waiver. With the help of grassroots partners, LBP took its case to the public through blogs and media outreach, bringing statewide attention to the issue. After the election in November, LBP presented its research to the governor-elect and connected his transition staff with experts at the Center on Budget and Policy Priorities and the Department of Agriculture. One of the governor’s first acts was to renew the waiver, allowing more than 64,000 Louisianans to keep their food benefits while looking for jobs. “The Louisiana Budget Project's efforts to preserve food assistance for able-bodied adults without dependents shows how research, advocacy and strong partnerships can produce meaningful policy change,” said LBP.

The Mississippi Center for Justice was instrumental in defeating legislation that would have imposed stricter requirements and harsher sanctions on people who rely on safety net programs such as SNAP, TANF and Medicaid. HB 1116 would have put up punitive barriers to resources, even limiting food assistance after economic and physical disasters, such as hurricanes. MCJ and other advocates worked tirelessly during the legislative session to inform lawmakers of the dangers of the bill and to encourage them to vote against it. Lawmakers did not bring the legislation up for a vote in either chamber, and the bill died.

The Mississippi Low-Income Child Care Initiative was pleased to have a national spotlight on funding disparities in the state’s child care subsidy program. The United States Commission on Civil Rights released a report on the impact of race on the program and urged the Department of Health and Human Services to adopt its recommendations. To spread the word, MLICCI held a news conference at the state capitol, where people directly affected by the lack of funding shared their stories. Several local, state and national media outlets ran stories on the report. MLICCI and its allies are still pushing for adoption of the recommendations.

"This entire experience has been a wonderful example of what grassroots pressure can accomplish."
-Appalachian Citizens' Law Center

Mountain BizWorks opened a new office in Boone, becoming the first community development financial institution with a full-time presence in North Carolina’s High Country region. The new branch offers more than just access to capital to small business owners in this predominantly rural area. Moutnain BizWorks has already made several loans in the High Country and is partnering with a local organization to provide business courses and workshops to accelerate local business creation and expansion, and to build a network of supportive entrepreneurs.

The federal POWER program (Partnerships for Opportunity and Workforce and Economic Revitalization) has awarded $13,374,234 in grants to 13 MRBF partners in Appalachia since it began in 2015. Through the Appalachian Regional Commission and Economic Development Administration, the POWER initiative supports communities making the transition from coal to a new energy economy. The funded projects range from workforce development to entrepreneurial support to sectoral development. A flurry of local resolutions of support pushed by advocates, including the Appalachian Citizens' Law Center, fueled the momentum for POWER. Public pressure and advocacy by ACLC and partners also led to the introduction of a Senate bill for the Revitalizing the Economy of Coal Communities by Leveraging Local Activities and Investing More (RECLAIM) Act, which would use $1 billion in abandoned mine land funds to foster economic transition. "This entire experience has been a wonderful example of what grassroots pressure can accomplish," said ACLC. (A full list of grants to MRBF partners can be found here. To learn more about the POWER initiative, click here.)