We are in an era of transition, opportunity and hope. A new federal administration is beginning to address the atrocities and negligence of the previous one. Two new senators – one Black, one Jewish – are making history by representing Georgia. COVID vaccine distributions are allowing a glimpse out of a dark tunnel.

The Babcock Foundation also is in transition. As we announced last week, CEO Justin Maxson has accepted a position in the Biden-Harris Administration – as Deputy Undersecretary for Rural Development. While Justin’s departure is a loss for the Foundation, it is a gain for rural America, and our board and staff are strong and well positioned to move forward in service of our mission.

Even with all the moving parts as we dig into the work to create a better South in 2021, we believe it is worthwhile to look back on the achievements of the last year. In many regards, 2020's dubious reputation is well deserved. COVID began its onslaught, claiming hundreds of thousands of lives and plunging millions into joblessness, economic distress and poverty. Well documented police and vigilante violence against Black Americans prompted uprisings across the country. Voter suppression was rampant, and bad actors tested our democracy.

Our grantee partners exhibited remarkable adaptability, redirecting their energies to supporting people harmed by the pandemic, distributing cash, food and personal protective equipment, creatively rethinking how they engaged with communities, and capitalizing on opportunities to advance criminal justice reform. They did all this as they helped generate record voter turnout, particularly among voters of color. 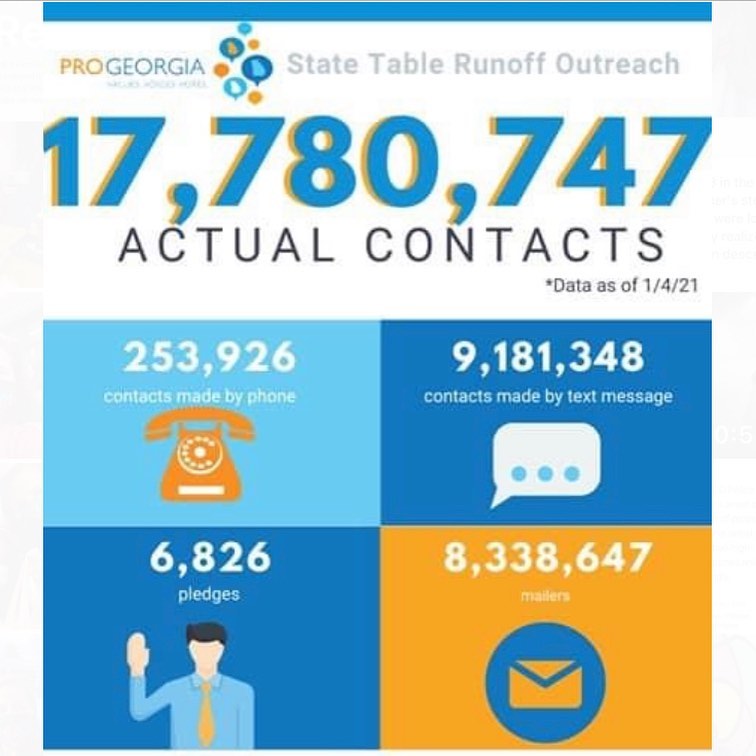 First and foremost, we take a deep bow to the hardworking folks in Georgia who have been organizing and base building for many years to realize a more representative democracy. These groups include many of our grantee partners: ProGeorgia, GALEO, Asian Americans Advancing Justice-Atlanta, Latino Community Fund, GLAHR, New American Pathways, Georgia STAND-UP, Partnership for Southern Equity and Women Watch Afrika. They registered tens of thousands of voters ahead of the presidential election, took a breath, then registered tens of thousands more voters leading up to the Senate runoff elections this month. In eight short weeks, ProGeorgia and its member organizations held nearly 18 million conversations in several languages. That’s more than half of Georgia’s voting population. Voters of color turned out in record-breaking numbers. "This is our home, and it's our right to participate and to define our future," Gigi Pedraza, Executive Director of the Latino Community Fund, told NBC News.

Unfortunately, these organizations can’t take a well-deserved break. With the state legislative session underway, they’re working to protect voting rights as lawmakers seek strict limits on absentee voting, and to ensure the redistricting process is fair and transparent. "We often see legislation that is destructive to working-class people, everyday people, Black and brown people, immigrants, and undocumented folks,” Tamieka Atkins, Executive Director of ProGeorgia, told Prism. “So our fight continues.”

In Louisiana, voters rejected two amendments that would have restricted funding for public goods. “Fiscal fairness is about not balancing Louisiana's budget on the backs of low- and moderate-income earners,” wrote the Power Coalition, the statewide network of civic engagement organizations. “Amendment 4 would have put an artificial cap on state spending, while Amendment 5 would have opened the door for more tax breaks that would have primarily gone to oil and gas companies. Fortunately, voters overwhelmingly rejected both amendments, providing a decisive victory for our schools, health care, roads, and other important public goods.”

In Arkansas, voters rejected Issue 3, a proposed constitutional amendment that would have weakened citizens’ ability to initiate ballot initiatives. Arkansas Public Policy Panel was among the organizations opposed to the measure. Despite a regressive policy environment, advocacy groups have used ballot initiatives to advance supportive policies, including a minimum wage increase, education reforms and legalized medical marijuana.

Alabama voters approved an amendment to remove racist language from its 120-year-old constitution, which includes sections condoning school segregation, poll taxes and mixed-race marriage bans. Voters had rejected similar proposals twice since 2000, but the measure passed last year with 67 percent support. “This change will address one of the constitution’s original sins: its authors’ explicit intent to establish white supremacy in Alabama,” wrote Jim Carnes, Policy Director at Alabama Arise, which supported the amendment.

This month, Mississippi hoisted its new flag at the state capitol for the first time, six months after lawmakers retired one featuring the Confederate battle emblem. Last year Mississippians voted to replace the flag amid a national reckoning over the murders of George Floyd, Breonna Taylor, Ahmaud Arbery and other Black Americans. The new flag features a magnolia, the state flower, circled by stars that signify Choctaw culture. Several organizations, including Mississippi One Voice, had long advocated for replacing the flag. “This was a long time coming,” One Voice Executive Director Nsombi Lambright told the New York Times. “I’m glad to see this happen in my lifetime, in my son’s lifetime — in my grandmother’s lifetime.”

COVID: Pivoting to Care for Communities

Local and regional philanthropies and immigrant-serving organizations stepped up to the plate in meaningful ways to protect people from the health and economic harms of the pandemic. Many created mutual aid funds to support their communities through the crisis. While too numerous to list in this article, MRBF contributed to several of these funds, and you can read about them here and here.

Coalfield Development Corporation halted its normal operations, then adapted to serve its West Virginia community. Its sustainable agriculture company shifted to fresh-food mobile pick-ups to provide healthful foods. Coalfield’s woodshop designed emergency beds in case of overflow needs at local hospitals. Its t-shirt company donated its inventory of clothing to hospitals and shifted from making shirts to making masks for health-care workers. “These are but small measures to help, but they signal the kinds of resilient businesses our modern crisis-ridden world will need if it is to thrive in these uncertain times,” CEO Brandon Dennison told the Herald-Dispatch.

The Center on Budget and Policy Priorities has been advocating for more robust federal relief measures, and its partner groups have pushed for policy shifts to better support Southerners through the crisis.

Thanks in part to analysis, advocacy and recommendations by the Georgia Budget and Policy Institute, Georgia extended its unemployment insurance benefits from 14 to 26 weeks. More than a third of the state’s workforce is employed in retail, food service, and administrative support positions.

Similarly, Kentucky Center for Economic Policy played a critical role in Kentucky’s decision to expand unemployment insurance by identifying needed reforms, helping get them introduced in a bill and making the case in the media.

One of the most critical lifelines during the economic downturn has been the work of community development financial institutions. The federal government’s COVID assistance was difficult to access, so CDFIs stepped in to provide much-needed capital, keep businesses afloat and save jobs. Some examples:

Other Encouraging Developments of 2020

Down Home North Carolina and other organizations were able to effect bail reform in Alamance County, where a person’s freedom depended on whether they could afford bail, which advocates argue is a violation of due process and equal protection. Now, people in the county jail receive an individual determination of their ability to pay bail, an opportunity to be heard by a judge, and representation by an attorney at their first court appearance. “This change will have a positive impact for Alamance County residents, especially poor, Black and brown communities who have borne the weight of these unfair practices for so long,” said Sugelema Lynch, Down Home’s Alamance County organizer.

Appalachian Voices helped advance reforms during the legislative session to expand access to rooftop solar energy on businesses, nonprofits, schools and other government buildings in the coalfield region of Virginia. In April, the General Assembly voted to allow independent solar providers to offer third-party power purchase agreements to commercial-scale customers of two major utility companies. “Given the current economic crisis facing our local governments, allowing these solar projects to move forward so that they can begin saving money on their electricity bills as soon as possible is a gamechanger,” said Chelsea Barnes, AV’s New Economy Program Manager in a news release.

After years of work by the  Georgia Budget and Policy Institute, the state is modernizing its sales tax by collecting sales tax from online retailers and services like Uber and Airbnb. This was one of GBPI’s top four recommendations for improving Georgia’s tax code in its agenda, People-Powered Prosperity.

Thanks in large part to West Virginia Center on Budget and Policy’s efforts, the state reversed course on a corporate tax cut. WVCBP educated lawmakers and the public to persuade the legislature to vote against it. Its digital advocacy campaign generated nearly 700 constituent letters about the bill, which would have cost the state $300 million a year in tax revenue. WVCBP was also instrumental in convincing the governor to commit $1 million toward a complete and accurate 2020 Census count.

The end-of-year economic stimulus bill passed in late December included a one-year extension of the excise tax that funds the Black Lung Disability Trust Fund, thanks in part to the advocacy of the Appalachian Citizens Law Center. “We will continue to push for a ten-year extension next year, but this is a critical win for miners and families affected by black lung disease,” wrote ACLC. The Center also won millions of dollars in benefits and medical care for sick coal miners.

A music video produced by the Latino Community Fund of Georgia won the runner-up award in the national Get Out the Count Census Challenge. There were more than 700 submissions, and the award brought a $10,000 prize. The song is catchy, even if you don’t speak Spanish! Scroll down to watch “Me Toca a Mí, Te Toca a Tí!”

While 2020 had its bleak days – okay, months – our hindsight includes gratitude and awe of our partners, who adapted to harsh new realities to protect and empower people, and achieve significant wins despite considerable difficulty. We are excited to see how they carry forward into 2021 and beyond, and understand how we can best support them.