With her retirement on the horizon, MRBF Deputy Director Gladys Washington delivered the keynote address to the Greater New Orleans Funders Network's annual convening on October 22, 2019, which happened to be her birthday. Her remarks are as follows:

Thank you for having me here today for this convening of visionaries working toward a better Louisiana. The unity among funders and change-makers in this room is rare and serves as a model for the rest of the South and the rest of the country.

There is no doubt in my mind that the recovery from Hurricane Katrina would look very different without your diligence and shared sense of purpose. And of course you didn’t stop with post-diluvian affordable housing or job opportunities for local folks to help rebuild their own communities. You’ve helped move monumental criminal justice reforms, reducing the prison population dramatically, and making sentencing and parole guidelines a little fairer.

With the wind at your backs now, you are pushing back against the tide of gentrification and displacement. You are trying to ensure that coastal communities have a strong voice in the decisions that affect them. You are centering young people, particularly young people of color, in every conversation about greater New Orleans.

You are assailing the status quo. And in the South, the status quo has an awful lot of inertia keeping it in place. It does not want to budge. Structural systems of oppression and discrimination built over time reproduce themselves and morph in response to an ever-changing context. Your leadership in Southeast Louisiana is an unstoppable force capable of disrupting the status quo and fostering new structures with new leadership and new ideas.

These are worthy accomplishments and I applaud you. However, y’all know I didn’t come here just to laud you and blow smoke. I have a call to action. 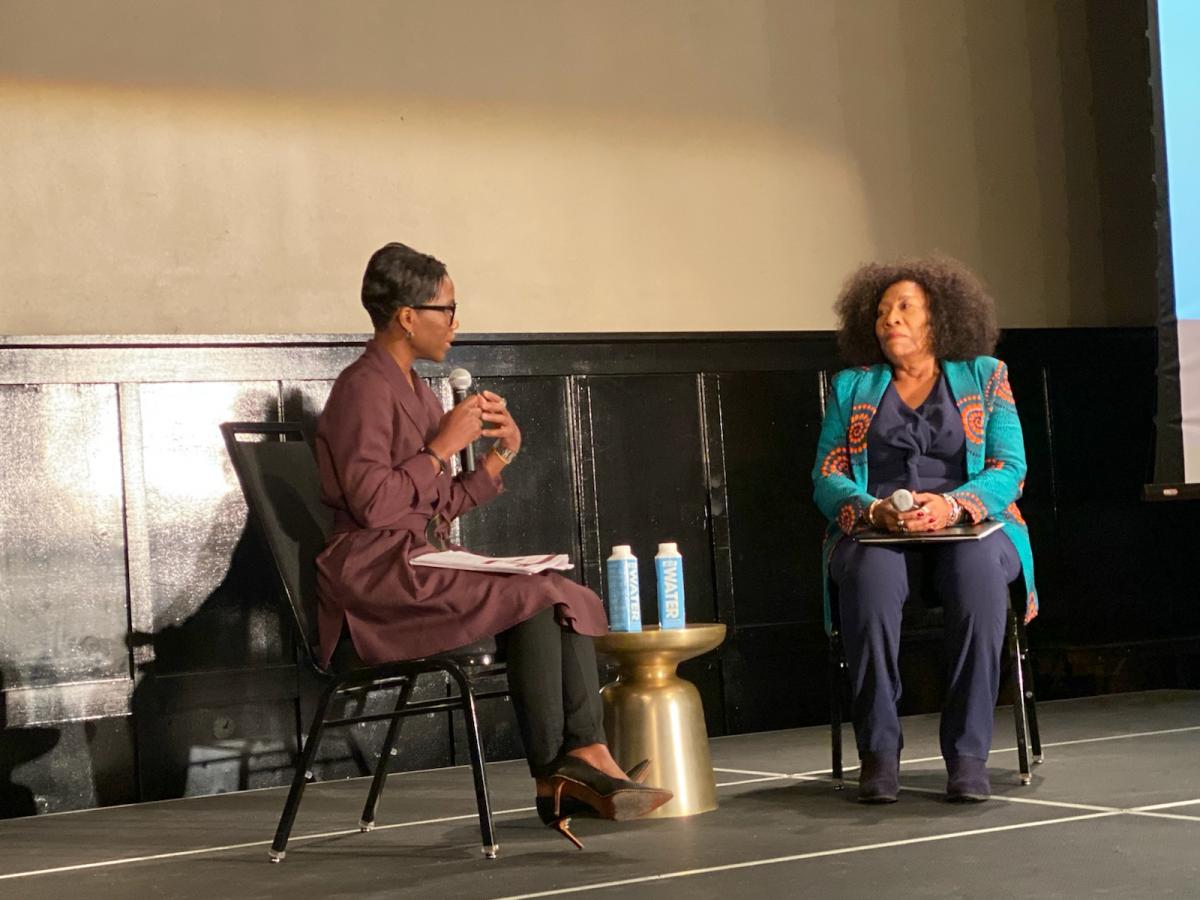 As you know, the passion to shape a better South is a calling. We have all been called to it. We are where we’re supposed to be, guided by something or someone greater than ourselves.

This divine calling affords us the fortitude, the mettle, the talents, the intellect, the words – everything we need to live up to the expectations we have for ourselves and the expectations of the people we’re supporting to help others. It pushes us to rely on one another even as we put in the work to become our very best selves, so we can show up right for those who rely on us. That requires self-reflection and self-awareness: Have I done the best I can do in this place and time?

Because I’m an elder I have expectations of everyone in the room to carry on better than I have. I claim that as my elder privilege. In fact, today is my birthday, so I’m even elder-er than I was yesterday. Consider it a birthday gift. Or a retirement gift. It’s called “act right.” It’s free and you don’t even have to wrap it.

See, we funders think we’re special. We think we’re smart. We are privileged, but we are not special. And we may be smart, but we’re not the experts on what it takes to effect social change in the South. The experts are the people doing the work – the hard work of door knocking and phone banking and trust building and speaking truth to power, sometimes at great risk to their own personal safety.

The point is, philanthropic actors don’t do the work. We support the work. And that obliges us to rely on the voices of the community, to trust the people in the nonprofit sector to help us understand their work and know what needs to be done. It commands us to share the power circumstance has seen fit to bestow upon us.

How do we do that? First, we have to define power.

Rashad Robinson is president of the racial justice organization Color of Change. He says, “Power is the ability to change the rules.” And as you know, there are an awful lot of rules that need changing. We’ve seen how changing rules can improve lives and families and communities and economies. Foundations have the power to change rules through organized money and people. You’ve done it here in Louisiana.

Some say power is the ability to set agendas and distribute resources. We funders seem to think we should set the agenda and determine how grantees should spend the money we give them. So we offer short-term program grants and attach more strings to ‘em than a family of marionettes. When we do that, we’re hoarding power, withholding it from the very people who actually know how to make the change we broadcast in our mission statements.

We have to exercise our power with stakeholders, not over them. Sustained, general support funding is a power-sharing and power-building move. It says, “I trust you, as an expert who knows and cares about your community more than I do, to make decisions on its behalf.” If I give you a grant to organize rural folks, then white supremacists set fire to your office building, that grant does not help you address your most urgent problem. If I cut you a check to host convenings but hundred-year flooding destroys your building, that is a worthless check. Both of those things happened to organizations the Babcock Foundation supports in just the last three years. We trust our grantee partners to make adjustments and move as they need to based on their contexts and their discretion, not ours.

Similarly, helping organizations build their own capacity in the ways they know they need to is a power-sharing move. Addressing generations of oppression, exploitation and structural racism is going to take time. Lots of time. And money. Lots of money. When it comes to social change, less is not more. More is more.

Power is also about narrative – what it is, and who gets to decide. The Babcock Foundation’s communications strategy centers on lifting up the stories of our partners and the communities they serve – not with a third-person “voice of God” narration. We invite people to tell their own stories, speak their own truths, describe the work on their terms, in their own languages. We just hand them the bullhorn and the soapbox. Philanthropy can support the communications and internal capacity of organizations to work together to change the narratives about people of color and poor people in the South.

Culture is also a critical site of power and it is important that we learn how to fund it. We are learning culture moves faster than politics and economics. Philanthropy has to understand how we live into evolving worldviews.

We live in traumatizing times with racist and misogynist screams, screeches and attacks that assail our souls and can take our lives. I believe it is a power-building strategy for philanthropy to support healing justice. People cannot continually fight the battles we ask them to fight without rest and healing.

Shifting the paradigm between funders and practitioners forces us to rely on truth. We have to build trusting relationships so we can hear the truth from our grantee partners – the good, the bad, the ugly, the crazy and the stupid. They are our educators. They tell us what makes sense in their places and what does not. They feed us the information we need to take into a board room where power is concentrated and decisions are made. We have to listen, hear and carry that truth into the spaces we go.

When we build coalitions, we build power together. Everybody doesn’t have the same capacity to do the same thing. That’s why we rely on each other and stay in our respective lanes. Funders have to support the relationship building and the lane carving and the calling out and the calling in. See, everybody ain’t gonna get along. Everybody can’t be in the coalition. Some people need some act right, and before they get some act right, they’re gonna jack up some stuff and you need to let ‘em go. That’s painful but it’s part of how we learn to trust each other to do what we say we’re going to do and show up how we say we'll show up.

You all know about coalition building. The Greater New Orleans Funders Network epitomizes what a funder coalition should look like and how it should behave. That was not a natural process. It took work to build relationships of trust, to understand not everybody needs to do the same thing or think the same way. Rather, we need to discern what role each of us can play to influence the issues we care about most. You have the experience and power in this network to influence other funders to support people’s participation in their own democracy, the power building that happens when they do, and the structural change that results.

We have to build alliances with young people. Some of you are millennials or even younger. We need your help. Some of y’all need a little seasoning salt on you first – some of that “Slap Yo Mama” seasoning y’all got down here.

If we build power without an explicit racial equity lens, all we do is build more power for the people who already have it.

Now listen up, ‘cause this is important: If we build power without a racial equity lens, all we do is build more power for the people who already have it. These days “equity” is a buzzword in philanthropy. Sometimes we expect our grantee partners to understand it before we understand it ourselves. This is a moment to challenge philanthropy on its values, to support leaders of color, particularly black women, in the South. See, sometimes you have to remind folks what their consciences and values say. Those of us who are people of color haven’t fully leaned into our power. It’s as if we’re scared of our jobs. Once they let us in the door, it is our duty to prop it open for others to come in. This is a moment to build powerful coalitions among leaders of color, and among leaders of color and white allies.

But the onus is not on people of color. Philanthropic equity is an institutional matter. If foundations really want to achieve the goal of equitable funding, and that’s a big “if,” the generational sources of that wealth have to be named, claimed and directed to the people and communities that built that wealth, mostly on their backs. It is a moment when philanthropy can lead, ‘cause you know government sure ain’t doing it. This is the moment when philanthropy can put a stake in the ground around equity, by stepping into what we say we believe and epitomize those values by using all the tools philanthropy possesses: grantmaking, the endowment, investments, influence and who we hire. By doing that we can show other sectors – business, government, whoever – how to listen to each other, make decisions based on the truth and the narratives of the people who experience the challenges, and support them to create opportunities.

Speaking with you is one of the final acts of my tenure in philanthropy so I’d like to leave you with several things I have learned about leadership. One: Listen more than you talk so you can learn. Two: Enter every space confidently but with humility. Three: Pray or ask the universe for a spirit of discernment that provides you with what you need to use your power. These are the three rules that I have carried through more than 25 years in philanthropy. While simple, I hope you find them useful.

This is how we begin to create a better South together. We owe it to our children and grandchildren. We owe it to that something or someone higher than us who called us to this work and endowed us with the privilege to lead. And we owe it to each other.