A Battleground for Humanity and Dignity

On the occasion of the 50th anniversary of the Bloody Sunday march in Selma, Grantmakers for Southern Progress convened a funders’ delegation to learn about a diverse coalition of groups supporting structural change in Alabama today. At the Alabama Department of Archives and History in Montgomery, the funders heard from representatives of a robust network of statewide organizations working to improve the lives of low-wealth families and frame a more participatory democracy.

Many of the challenges of the past continue to stymie those efforts. Scott Douglas, Executive Director of Greater Birmingham Ministries explained how the Alabama Constitution of 1901 is a stubborn impediment to progress. (Watch the video.)

Despite the obstacles, these leaders are optimistic about a brighter future, and have constructed a sturdy framework to get there. Each panelist was asked his or her vision for Alabama in five years. Kimble Forrister of Alabama Arise is hopeful for Medicaid expansion, a sentiment shared by his fellow panelists.

“Healthcare is available to all who need it, and we can stop having 700 folk die a year because they don’t have healthcare,” said FOCAL Executive Director Sophia Bracy Harris. “Childcare is affordable and accessible. … We’ll have a delivery system that takes into account zero to five, and we’re not focusing on four-year-olds and leaving out the most costly childcare that hits the budgets of low-wage families.”

The panelists also hope to see a higher minimum wage, a more equitable tax structure, fewer anti-immigrant policies and comprehensive prison reform. Craig Baab of Alabama Appleseed pointed out that due to voter restrictions for felons, one in five black males in the state can’t vote – a population the size of Birmingham’s.

The issue of voting rights was a prominent theme among the panelists, and it loomed large over the commemorations in Selma, where thousands of people crossed the Edmund Pettus Bridge to honor the foot soldiers whose blood stained it 50 years ago. President Obama warned against the erosion of the gains won there: “The Voting Rights Act, the culmination of so much blood and sweat and tears, the product of so much sacrifice in the face of wanton violence, stands weakened, its future subject to partisan rancor.” 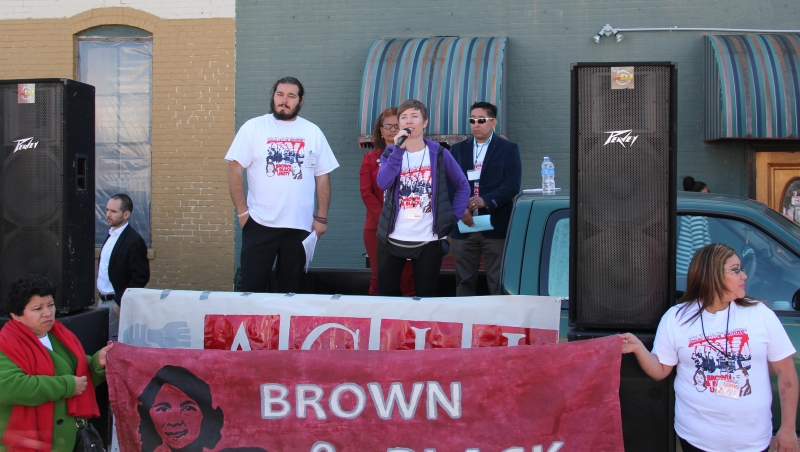 Joining the President at the foot of the bridge were former President George W. Bush, Alabama Governor Robert Bentley, Rep. Terri Sewell and Rep. John Lewis, who suffered a broken skull on that site in 1965.

Lewis said people often ask him why he returns: “Why do you come back? What purpose does it serve? We come to Selma to be renewed. We come to be inspired. We come to be reminded that we must do the work that justice and equality call us to do.”

Among the groups answering that call is the Alabama Coalition for Immigrant Justice, whose members marched through the streets of Selma and across the bridge. Executive Director Ingrid Chapman pointed to ACIJ’s recent success in contesting HB 56, the country’s harshest anti-immigrant law, as an example of why statewide networks like hers are critical.